Methodological approaches to the collection of Sir Charles Bell

One of the most surprising aspects of the project for those interested in the history of photography of Tibet may be the extensive re-attribution of images formerly described as having been taken by Sir Charles Bell as having definitely or possibly been taken by Rabden Lepcha. 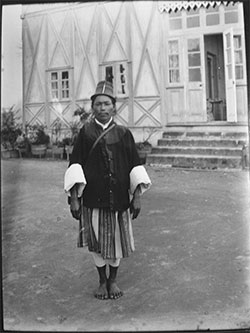 Rabden Lepcha was Bell’s Sikkimese orderly and he worked for Bell for 18 years. Identifying which images Rabden may have taken was important in the project because Bell himself had written in his book The People of Tibet that by 1920: “One of my Orderlies, Rab-den Lep-cha, had already to some extent learnt from me how to use my cameras, and was taking my photographic work more and more into his own hands” (Sir C. A. Bell, Oxford: Clarendon Press, 1928, p.168). This statement attracts little comment in most works that reproduce Bell’s photographs, but clearly an attempt had to be made to identify Rabden’s corpus of work within the Bell collection if the objective of identifying who took each photograph and when was to be achieved. This process will be described below in some detail because of the significance of the collection in the history of photography of Tibet.

The Bell collection curated by the Pitt Rivers Museum consists almost entirely of glass plates, although there are a small number of film negatives as well. The glass plates fall into three sizes – Half plates (H-plates), Postcard plates (P-plates) and Quarter plates (Q-plates). There are no prints. Another distinctive feature of the Bell collection in the Pitt Rivers Museum is that there are large numbers of copy-negatives where the photographer has re-photographed a print (either of another photographer or a print for which the original negative is missing) to make a negative. There are many possible reasons for wanting to create a new negative from a print but one of the main rationales in the Bell collection appears to be to ensure that he had negatives from which lantern slides could be mage even when the photograph was not his own.

To determine which images could potentially have been taken by Rabden Lepcha, therefore, a number of steps had to be taken. First, it was necessary to try and identify which images had actually been taken on the Mission to Lhasa in 1920-21 rather than acquired at an earlier date (there is sometimes a tendency to identify all Bell’s images within this timeframe regardless of the fact that Bell acquired images of Tibet from 1903-4 onwards). These were obviously the images of most significance to the project. It is also within this group that, according to Bell himself (see above), Rabden’s main corpus of work was likely to be found. Second, the original negatives had to be distinguished from the copies and, related to this, original images taken using Bell’s own cameras had to be distinguished from those acquired elsewhere. If the original images taken with Bell’s cameras during the period 1920-21 could be identified, then it might be possible to identify which were taken by Bell and which by Rabden Lepcha.

This was, therefore, a complex process and involved trying to understand the epistemological basis of Bell’s collection as a whole. It was not a simple matter of looking for evidence on a negative or print that might identify the image as being originally owned or taken by another photographer, an initial or inscription for example. The images had to be subjected to a wider interrogation which included an archival reappraisal of the processes of memory and narrativity that underpinned Bell’s handlist of images (to understand why he seems to have misattributed some images despite his apparently meticulous note keeping) as well as a critical study of diaries written on the Mission and the photo-mechanical process of image-making. The methodology adopted involved a critical approach to both the object and the textual archive and largely necessitated that the collection as it exists in the Pitt Rivers Museum be deconstructed almost to a point of disintegration in that all the ‘knowns’ and ‘givens’ about the collection had to be tested and allowed to acquire new sets of coherences. In this way it could be reconstructed with a new, internal logic. This complex process has resulted in the re-attributions one sees on this site.

As stated, the first steps involved identifying which were original images in the Bell collection and which of these had been taken during the Lhasa Mission of 1920-21. Identifying copy negatives involved a close examination of each glass plate under magnification. Sometimes it was possible to see the white border of a re-photographed print in the negative, and sometimes the textile background of the copy box in which prints were placed to be re-photographed.

However, Bell was sometimes so meticulous in his re-photography that such evidence was not visible; sometimes, too, only part of the original print would be copied thus cropping any borders. In these cases, magnification would reveal the texture of paper underlying the image in the copy, as can be seen in the example above. The negative on the left is an original, the negative on the right is a copy and the paper grain can be seen when magnified [see below]. The lack of depth seen in textiles and foliage under magnification is sometimes a useful indicator of a possible copy negative.

Photographic formats and their identification 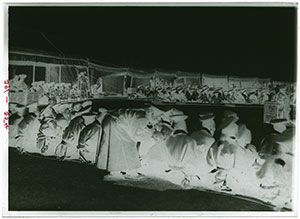 In short, after a very detailed examination of the glass plates in the Bell collection under magnification it was possible to reach the following conclusions concerning the numbers of copy negatives in the collection: of the H-plates, 88 appear to be copies (20%); of the Q-plates, 98 appear to be copies (30.4%); of the P-plates, 154 are copies (100%). The implications of this will be discussed more fully elsewhere. Of the 917 glass negatives in the collection, c.239 (26%) of these can be related to the Mission to Lhasa 1920-1921, although this figure also includes a small number of images taken on the routes into and out of the country.

These latter are more difficult to date as Bell would have travelled a significant part of this route, say as far as Gyantse, many times. The assumption made in attributing dates to images is that only those that can be identified with a high degree of certaintly as having been taken on the Lhasa Mission have been recorded as such (albeit sometimes with ‘?’ suffixed to the date range). Other negatives have been accorded with various timeframes, e.g.: 1904-1922. These broader date ranges have been informed by a general awareness of Bell’s biography of official work in the region, as well as by factors relating to photo-technical processes such as the use on his glass plates of varnishes and/or intensifiers and masks. Of those images that were clearly taken in and around Lhasa, they were almost entirely of H-plate and Q-plate size.

The choice of plate size is not insignificant as it does seem to be quite distinctive of Bell relative to other contemporary colonial photographers based in the Chumbi and Trade Agencies region and with whom Bell traded images (Henry Martin, David Macdonald, W. P. Rosemeyer, Lt Col Kennedy, et al). The contention that Bell preferred to use H- and Q-sized plates on the Mission to Lhasa is supported by the fact that only 8 of the P-sized images on glass plate negatives in the PRM Collection are of Lhasa. Furthermore, these can all be attributed with some certainty either to the telegraph engineer W. P. Rosemeyer, who visited Lhasa on numerous occasions from 1922 onwards, or the Medical Officer on the latter part of the Mission to Lhasa in 1920-21, Lt Col Robert Kennedy (this role was initially taken by Mr Dyer, Kennedy replacing him early 1921). There are, however, some 27 unique image performances among the lantern slides that were derived originally from P-sized negatives. These original images again seem likely to have been taken either by Rosemeyer or Kennedy. Of the Mission-related glass plate negatives, 28 (11.7%) are copy negatives. However, most of these are copies of images for which the original performance is also in the collection and thus reflects the desire either to make a duplicate of a particularly significant image for archival purposes or for making lantern slides. From this process, therefore, it was possible to determine that Bell used H- and Q-plates in his two cameras (and occasionally large film negatives for which his cameras could be adapted).