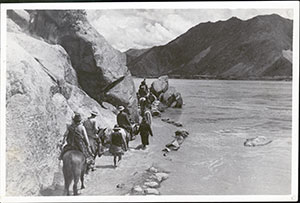 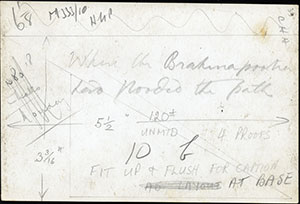 The collections of Frederick Spencer Chapman and Evan Nepean in the project are related to each other because both participated on the 1936-37 Mission to Lhasa under Sir Basil Gould and exchanged photographs with each other. Indeed Nepean handed over many of his original negatives to Chapman because Chapman, as Mission Secretary, for most of the mission took on the role of compiling the photographic record for submission to the Government of India and the Foreign and Political Department in London. (Cf Harris Seeing Lhasa 2003:62-63)

The Chapman collection in particular includes a wide variety of photographic objects – film negatives of different sizes, prints of different size and date, colour transparencies and cine film (which was not included in this project which considers only still photography). The collection, however, acquired these multiple performances over a number of years reflecting the reproduction of images through publication and exchange. Many prints have extensive photo-editorial comments and markings on their backs, which have also been presented on the website because of their significance to the methodology of research. 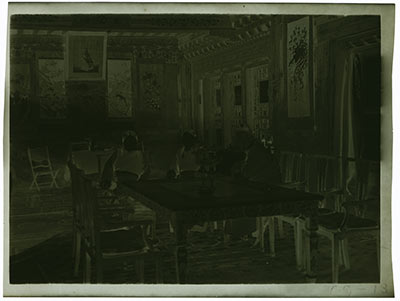 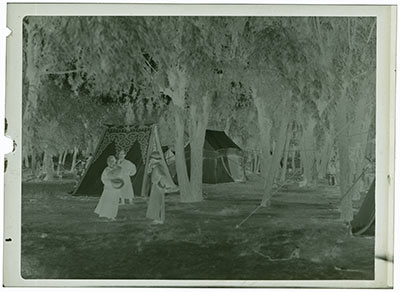 In this case, therefore, there was a need to develop a research methodology that would assist in identifying which photographs had been taken by Chapman and which by other members of the Mission (such as Nepean and Philip Neame), what the photographs were of and when they were taken. In this way the history of image taking on the mission had to be explored in considerable detail. The slide shows the range of inscriptions and other markings that were critical to identifying images in these ways. The top right image shows the reverse of the scene on the left of the Mission part progressing along a flooded path en route to Lhasa. These markings have been added by a photo editor, possibly from the publisher Chatto & Windus. In this case there is also a caption, but there are also a number of other inscriptions including in the top right corner the reference ‘CHA’. The significance of these markings became clear during the research. 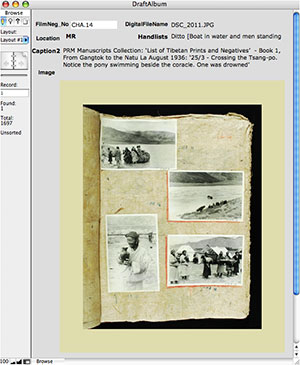 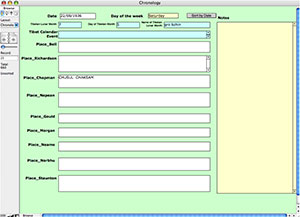 Screenshots from the research database (Filemaker)

Details about the photographs were gradually built up using a number of textual and other sources. Critical in the process was the discovery in the Pitt Rivers Museum Manuscripts Collection of the original handlists of negative rolls and film packs that Chapman compiled whilst in Lhasa. Another key textual source was the official Mission Diary in which many photographs were published. However, it was not assumed that images published were inevitably taken on the day which they illustrated as it became clear that images were not date specific in this way. We were also fortunate to have on loan in the museum copies of the photographs in the form of the albums compiled in Lhasa from a private collection and these helped to corroborate the research findings. Limited access to these materials have been made on this website with the owner’s permission with the express intent of demonstrating this aspect of the research methodology.

The way that information was gradually built up around images can be demonstrated using the print seen previously identified by the reference ‘CHA’. First, a database was created of Chapman’s handlist (top right of slide), with each image being given its own record, whether or not it was in the PRM’s collections. The critical field was the film roll and image number recorded in the ‘Previous Other Number’ field. ‘CHA’ in this case was the reference given to a film roll and the image also had an individual number identifier, in this case ’14’ so the field in this record had the reference ‘CHA.14’. A second database was developed from the loan material so that each photograph in this material also had its own record (bottom left). The two databases were related through the number reference field as described as the loan material also gave similar identifications for each image. This information was then imported into the handlist database as a cross-reference and check on the data. A third database was then created from the Mission Diary in which a record was made for each day and the location of the various mission members was identified. The value of this will be explained below.

Screenshots from the Chapman research speadsheet

The most complicated part of the research into Chapman’s collection related to his use of multiple cameras – four of which contained black and white film and one of which was always loaded with colour film. However, from this information the challenge then became to attempt to reconstruct the order in which the photographs were taken across these various cameras during the course of the mission. Certain distinctive features relating to the photographic process were useful in this analysis. First, it was clear that photographs were developed almost immediately after they were taken during the mission, and also that rolls of film were not allowed to remain the cameras for too long in case they or the films became damaged, a particular concern in the harsh environmental conditions of Lhasa. The different negative sizes could also be related to different numbering systems in the handlists so that it was possible to attribute images to a particular camera type in which certain negative sizes were used. Using information from the Diary and relating these to the place identifications in the captions, it became possible to make a broad analysis of the use of negatives during the course of the mission and across the different camera types. The draft findings of this can be seen in the spreadsheet above, but the research lends itself to a very interesting discussion of the construction of a photographic vision of Lhasa during the whole of the Mission, which shall be discussed elsewhere.(Cf Harris Seeing Lhasa 2003)

When all this information had been collated it was then possible to transfer it to the main database for the relevant collection. Here one can see how the information about the image ‘CHA.14’ has been built up and related. The database details the film roll number, the place and date on which the image was taken and the photographer. In this way it became possible to identify not only who had taken each photograph, but with a great deal of precision, where and when.