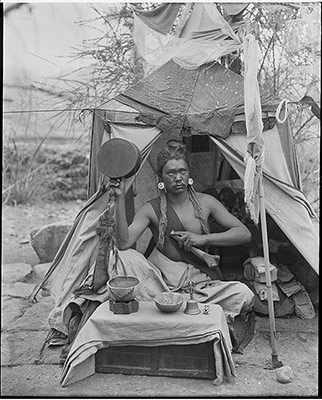 A Truptop Lama. He holds a skull drum and thigh bone trumpet in his hands, has two skull cups, bell and dorje in front of him. A "Hermit's band" or gomtak is placed over his right shoulder.

Manual Catalogues - Bell's List of Illustrations entry: "[No. of chapter] XXXII to XXXIV. [Subject of Chapter] The Religion [Subject of Illustration] H.197 (co) Truptop Lama (e). Skull drum and thigh-bone trumpet in hands, 2 skull cups, 1 holding beer (c) and the other tea (d), bell and dorje in front of him; ka-tam (b) (long pole) on his left. "Hermit's band" (Gom-tak) over right shoulder. These men wear long hair like Sadhus. [Remarks] (e) belongs to the Nyinma sect. (c) for offering to deities (lha). (d) which he drinks himself. In this he may keep his food generally. (b) The minds of deities dwell in the ka-tam"

Contemporary Publication - Published in 'The Religion of Tibet', Bell, C. A., Oxford: Clarendon Press, 1931, facing p.72:" 'Seated at his little table, almost naked, he held in his right hand a drum made from a human skull.' "

Other Information - Description: Bell's Diary entry for 17th May 1921:"Rabden has, at my request, recently taken a photo of a Trup-tor priest (See List of Illustrations, Book II, (chap 32-35), bottom of page 19). The Trup-tor told him "Nobody has succeeded in photographing me, though several have tried, for I have a god ( lha) inside me." Then, as an after-thought he added, "Still if your photo comes out well, you might give me a copy." // It has come out very well, and Rabden has given him a copy accordingly. He was very pleased to get it, has had it framed with glass and all complete and put it up in his room. He made no further remark about the god inside him." [Vol. X., p.59]