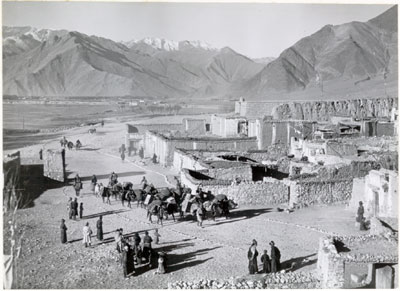 The Regent's baggage travelling in front of him on his return to Lhasa from Samye Monastery. Passing through Shingdonka, a butcher's village 4 miles west of Lhasa. The mule loads are covered with golden cloths edged with scarlet (the regent's colours). Stones have been laid on either side of the road to mark the Regent's route

Notes on print/mount - 'Shing-dong-kar' has been written beneath the image in the album in pencil, apparently not by Hugh Richardson [MS 10/06/2006]

Manual Catalogues - Caption in Chapman's hand-written list of negatives made whilst on the Mission to Lhasa, 1936-7 [See PRM Manuscripts Collection]: 'Regent’s baggage at Skingdonka '; PRM Manuscripts Collection: ‘List of Tibetan Prints and Negatives’ - Book 3: ‘14/1 - The Regent returns from a visit to Retung [Reting] Monastery. His baggage comes ahead of him. The roadsides are lined with stones at Shing-donka village’ [MS 01/04/2006]