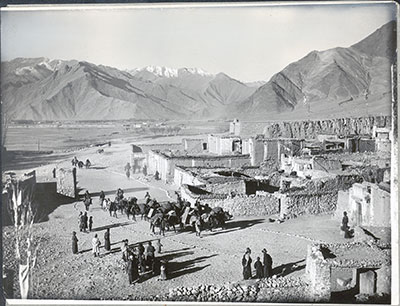 Notes on print/mount - The back of the print is covered in crop marks and reproduction instructions. The reference 'C.13.13' has been written on the back of the print in pencil, as has the caption "The Regent's baggage passing through Shingdonka". A thin piece of paper has been stuck across the top back edge of the print and folded over the front of the image. This was used for transferring cropping and reproduction instructions. The caption has been repeated on this piece of paper. The sky line in the print has been modified to enhance the foreground in the image. It has been given a matt grey texture, which contrasts with the gloss of the rest of the print [MS 01/04/2006]

Manual Catalogues - Caption in Chapman's hand-written list of negatives made whilst on the Mission to Lhasa, 1936-7 [See PRM Manuscripts Collection]: 'Regent’s baggage at Skingdonka '; PRM Manuscripts Collection: ‘List of Tibetan Prints and Negatives’ - Book 3: ‘14/1 - The Regent returns from a visit to Retung [Reting] MOnastery. His baggage comes ahead of him. The roadsides are lined with stones at Shing-donka village’ [MS 01/04/2006]