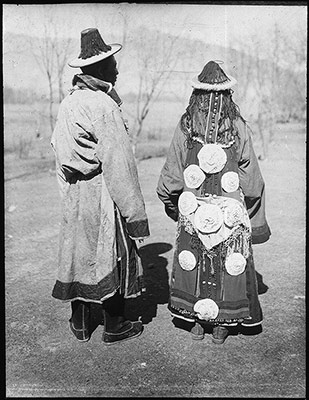 Golok man and his wife, back view. On the woman's back are large engraved discs of silver; turquoises and corals running down her hair

Manual Catalogues - Bell's List of Illustrations entry: "[No. of chapter] LI. [Subject of Chapter] Tribes to the East [Subject of Illustration] H.284 Golok man and his wife, back view. On the woman's back large engraved discs of silver; turquoises and corals down her hair. [Remarks] L.262 (Y in L)"

Notes on print/mount - '30' has been written in blue-black ink. This slide seems to have been used as slide 30 in the lecture 'A Year in Lhasa', which was first presented at the Royal Geographical Society on 3rd December 1923. The text, with a lesser number of images, was later published in The Geographical Journal of February 1924. Bell may also have presented this lecture on other occasions about which we have no information at present. [MS 7/9/2004]