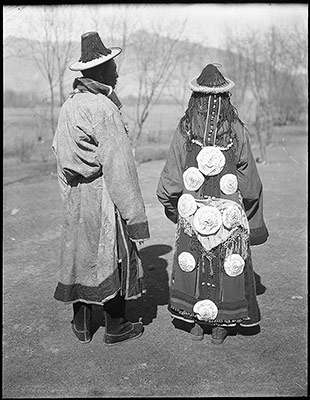 Golok man and his wife, back view. On the woman's back are large engraved discs of silver; turquoises and corals running down her hair

Manual Catalogues - Bell's List of Illustrations entry: "[No. of chapter] LI. [Subject of Chapter] Tribes to the East [Subject of Illustration] H.284 Golok man and his wife, back view. On the woman's back large engraved discs of silver; turquoises and corals down her hair. [Remarks] L.262 (Y in L)"