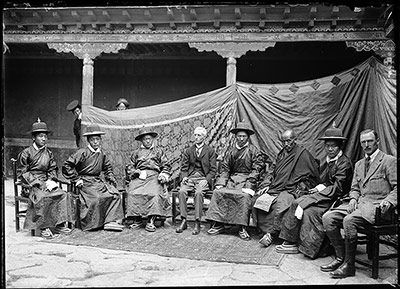 Sir Charles Bell with some of the guests at the Ache Lhamo drama that he hosted. Sitting in front of a textile background hanging from carved and painted pillars of a building. Two servants in background. From left to right seated: Dorje Theji, Duke of Changlochen, Minister Tsarong (Shappe), Sir Charles Bell, Minister Ngar-po (Shappe), Priest Minister Parkang (Monk Shappe), Duke of Punkang, Kennedy. Bell and Kennedy are smoking cigars.

Other Information - Setting: Bell's Diary for 12th August 1921:"I gave a theatrical (Ache Lhamo) entertainment, lasting three days, to some thirty or forty of my Tibetan friends, the total number entertained including servants being 70 to 80. Tibetan custom prescribes that the servants of those invited shall also be fed. In addition to cups of tea, every half hour or so. Two meals are given daily, one about mid-day, and the other about five in the afternoon. Tsarong Shappe, Palha Kenchen and Ngar-po Shappe, who is related to Palhese, are very generous in lending me silk hangings, cups, cooking utensils etc. etc. // The entertainment was given in the Tse-trung Lingka. We, host and guests, sit in the Tro-khang; Kennedy and I with the Shappes and Dukes on the roof under a tent awning; the other guests in the verandah below. The Prime Minister is too unwell to come." [Diary Vol. XI, p.89]