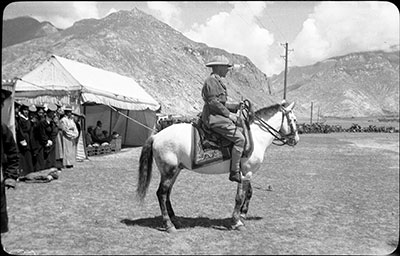 Soldier on horse, possibly Brigadier Neame, inspecting troops at a military review near Trapshi held in September 1936. Spectators can be seen lining the parade ground in the background whilst Tibetan officials are seated and standing in and around a tent on the left

Other Information - Setting: This photograph was taken on September 7th 1936 when a review of Tibetan troops was held for Brigadier Neame, who had travelled to Lhasa as part of the British mission in order to give military advice to the Tibetan government. The photograph was taken by Evan Nepean, whose arrival in Lhasa had been delayed due to technical problems with the wireless equipment. He arrived in Lhasa the day prior to this event [MS 30/03/2006]