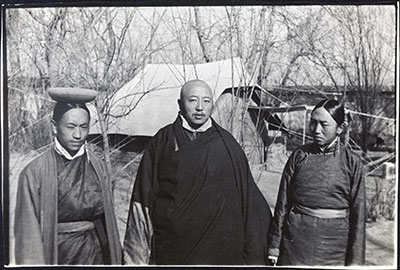 Rampa, the Tibetan official who acted as 'Lay Guide' to the Mission, one of the Trunyik Chempo, or leaders of the Ecclesiastical Party who acted as personal secretaries to the Dalai Lama, and a junior official. Mission tents in background. On this day the Mission had invited the four Trunyik Chempo to lunch at the Dekyi Lingka