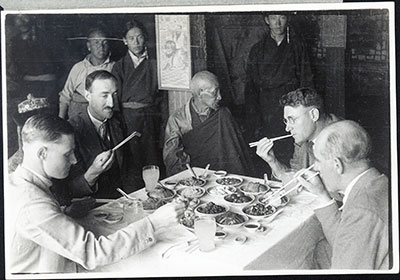 The British Mission lunch with the Lord Chamberlain, or Chikyak Khenpo. Seated from left to right: Dagg, (possibly Norbhu concealed), Nepean, the Lord Chamberlain, Morgan, Gould. The table is full of dishes, including stewed peaches, Mongolian ham and tinned herring, which were appetizers to the main course to follow. Servants can be seen in the background

Notes on print/mount - The back of the print is covered with crop and reproduction instructions. The reference 'C-E-28' has been written on the back in pencil, as has the caption "We lunch with the Lord Chamberlain (L to R) Dagg, Nepean, our host, Morgan, Gould". A piece of thin paper has been stuck to the back of the print and folded over the front. Usually this would be used to transfer cropping instructions from front to back but it has not been used in this case [MS 24/03/2006]

Other Information - Setting: The British Mission lunch with the Chigyab Khembo (Lord Chamberlain of Tibet). From left to right: Dagg, Nepean, the Lord Chamberlain, Morgan, Gould. Tibetan lunches involved huge quantities of food and chang (beer) and often included a dozen courses. The British tried to hold their own with traditional British luncheons but they often appeared (to Mission members) quite meagre in comparison. There was an order of precedence for the acceptance of invitations to dine and the British could not accept any invitation until they had first dined with the shappe (members of the Tibetan Cabinet). At this particular meal the delicacies included sea slugs, sharks fin and Jacobs crackers. Members of the Mission are shown eating with chopsticks as was the practice of high-ranking Tibetans. [CH 2003]