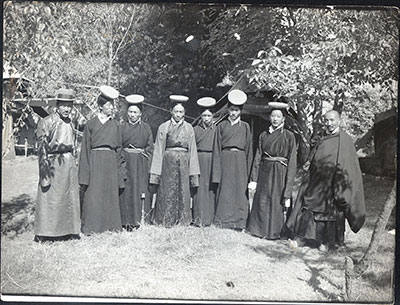 Group of 4th and 5th ranking officials in the garden of the Dekyi Lingka. Sonam kazi on left, monk guide to the mission, Dapma Kusho Tsedon, on right, lay guide, Rampa, fourth from left. The two secretaries have pen cases stuck through their belts signifying their official status. Tents belonging to the mission can be seen in the background amongst the trees. Two secretaries to the cabinet can be seen with pen cases placed in their belts

Notes on print/mount - The back of the print is covered with crop and reproduction marks and instructions. The caption "Group of junior officials. Sonham on left, monk guide on right, lay guide fourth from left, two secretaries of the cabinet have pen-cases through their belts" has been written in pencil. This caption overlays the reference number 'C/6/14' which has been partially erased [MS 22/03/2006]

Manual Catalogues - Caption in Chapman's hand-written list of negatives made whilst on the Mission to Lhasa, 1936-7 [See PRM Manuscripts Collection]: 'Group of 8 4th and 5th R. [rank] officials in our garden'; PRM Manuscripts Collection: ‘List of Tibetan Prints and Negatives’ - Book 2: ‘36/4 - A group of young officials and secretaries. Fourth from left our lay guide, on right our monk guide’ [MS 22/03/2006]

Other Information - Setting: Mission Diary for October 3rd: "Today we gave the last of our big lunch parties. The guests were officials below the fourth rank. They were as easy to entertain as all our earlier guests and it was an enjoyable afternoon but we were all relieved to see the end of a week of parties" ['Lhasa Mission, 1936: Diary of Events', Part VII p. 2, written by Hugh Richardson]. See Bodleian Library Hugh Richardson Archive MS. Or. Richardson 3 folio 42 for a fuller description of this event. [MS 22/03/2006]