The Tibet Album as a Research Resource

The Tibet Album can be used as a kind of ethno-historical encyclopedia of Tibetan culture and an online image library. However, it is also far more than that. Our work has been shaped by an intellectual agenda in which photographs are viewed as "good to think with". Staff at the Pitt Rivers Museum pioneered the "visual history" approach to museum collections and have developed sophisticated forms of analysis that eclipse earlier methods of categorising and interpreting photographs. For The Tibet Album we have tried to provide entry points from Tibetan perspectives, rather than merely reproduce a Western museum structure. As an internationally renouned ethnographic museum with a teaching and research remit, the Pitt Rivers Museum is a unique environment in which to pursue this kind of work. (See Pitt Rivers Museum and Tibetan Collections at the PRM) Its staff are recognised scholars in all kinds of fields, many of whom combine regional expertise with theoretical innovation. Like other projects at the Pitt Rivers Museum, the Tibet project has submitted the museum and its collections to new forms of investigation and made our results accessible to others in the form of a website. We hope that the principles and practices underpinning The Tibet Album will be of benefit to other museums and for anyone who wants to explore the use of digital technology in analysing objects or photographs. They could be applied to quite different material or to gathering the tens of thousands of other photographs of Tibet into a global virtual museum.

Why "The Tibet Album"? 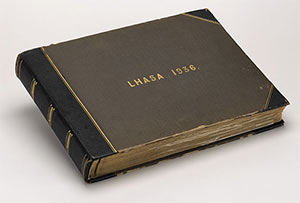 The idea that photographs are both a reflection of history and active agents in the production of history informed the development of this site and the research project that underpins it. (See "Tibet Visual History 1920-1950") We anticipated that by producing a digital database and scanning thousands of images we would be able to link large numbers of photographs in previously unimaginable ways. We also aimed to reanimate the "life history" of each photograph and to reconstruct its position in various visual narratives from the personal to the highly public. We have approached photographs as original and unique objects in their own right, with historical information being contained not only in the image, but also in the way the photographs were presented and used. An image can exist in a number of formats such as prints, negatives, photogravures or lantern slides, it can be cropped or copied. (See Formats) All this tells us something about the history of the image and the ways it has been used to construct ideas about people and places, such as in this case Tibet. The Tibet Album website has been designed to reflect the results of our research methodology (See Methodology section) and the new ways of thinking it has stimulated. 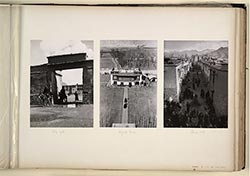 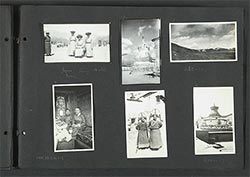 On one level, this is expressed in the form of innovative features such as the "My Tibet Album" function, which enables users to make their own visual narratives from the material contained within the site and to share them with other people. This idea is typical of our approach, in that it came out of a response to historic objects held in the museums, such as the album created for Hugh Richardson from photographs taken during the 1936 Gould Mission to Lhasa or Harry Staunton's album from his visit to Tibet in the early 1940s (See Collections) Each of those albums has a very different feel to it. Richardson's is highly formal in its presentation and the photographs it contains have high aesthetic appeal with minimal labeling. (Album Page BMR.86.1.19) Staunton's, on the other hand, is far more intimate and casual in its arrangement, content and captioning. (Album Page 1999.23.1.10) Albums such as these reveal the ways in which photographs (sometimes even a photograph of the same subject or even the same photograph in another format) can function differently depending on who has taken the photograph or arranged it in an album, who that album is intended for (its reception) and the relationship between image and text. All of these factors can determine how 'meaning' is ascribed to photographs. For The Tibet Album we have explored this issue both on the micro-level (that is through close attention to thousands of historic photographic objects and their documentation) and within the context of broader ideas about the meaning of Tibet as a place in memory and the imagination. 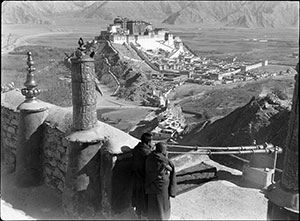 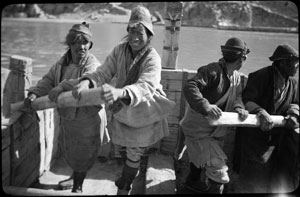 Photographs have the power to trigger all kinds of associations (which vary from person to person) but they also operate in cumulative and collective dimensions so that some images may appear to be rather familiar whilst others are strange and challenge received ideas about Tibetan culture and history. This site includes many photographs that have become iconic due to their constant reproduction, such as Frederick Spencer Chapman's view of the Dalai Lama's palace in Lhasa. [1998.131.305.1] This photograph deploys a classic compositional device - horn-blowing monks in the foreground draw the eye to the main subject, the Potala, which is sharply focused in the early morning light. However, thousands of other photographs in The Tibet Album document less well-known features of Tibetan life and have never been published or seen before. ( 2001.35.74.1) Clearly they have immense value as a visual record of Tibet in the first half of the twentieth century but they also demonstrate the importance of museum collections as archives in which everything is treated as potentially significant. This Ôdemocracy of the object' is part of our curatorial policy and it informs our aim of making the photographs available to all. Our rationale means that the value and importance of any photograph can be decided by the user/viewer as they construct their own visual narratives and contribute to the ongoing interpretation of the photographs. We have named our site The Tibet Album in order to reflect some of these ideas. Of course, by amassing more than 6000 digital images of Tibet in a virtual space, we too are creating an album, though on a scale and depth inconceivable to the photographers whose historic images we have worked with.