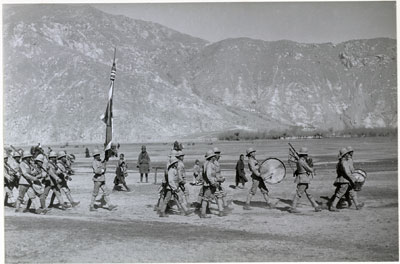 Lhasa military band and colours, probably near Trapshi. Onlookers line the road to watch them march past

Other Information - Album: This image appears on page 62 of the album along with three other photographs taken of the Tibetan Army, including images of different types of uniform and weapons. However, not all of them were taken at the Military Review in September 1936 [MS 25/08/2006]