Mondo outside his house 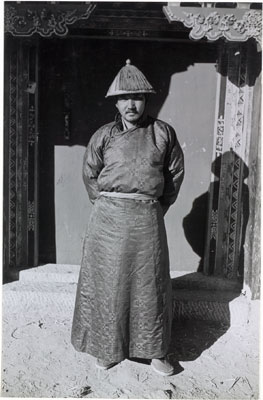 Mondo standing outside his house in front of an ornately carved doorway. One of a series of images taken on a visit to Mondo by Chapman and other members of the mission

Notes on print/mount - 'Mondong' has been written beneath the image in the album in pencil, apparently not by Hugh Richardson [MS 18/08/2006]

Other Information - Related Images: Images prefixed with '8' comprise a group of negatives containing images of Mondo’s house, a weaver and Ragyapa. They seem to have been taken in January 1937 [MS 15/08/2006]