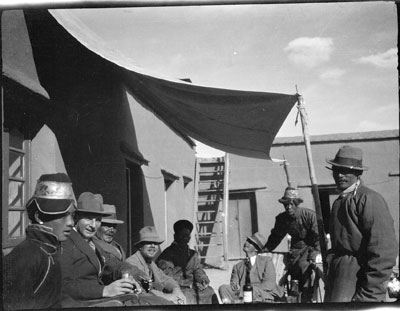 Members of the British Trade Agency staff give lunch to Tering Raja on or around Christmas day 1927. Tering Raja is seated in the shadow under the awning in the centre of the group. Left to right, seated: Sangster, Henry Martin, Major, Tering Raja, Dean. It was common for Agency staff to drink alcohol, as for many Tibetans, and social occasions were rare without alcohol flowing. However, some Agency staff were conscious of the reactions of their families in England to images such as this and this photograph seems to have been the subject of some discussion among Agency personnel [see Notes below]

Other Information - Description: [Extract from taped interview, Richard Blurton and Mrs Hopkinson] '55 - the same scene as 56' ['56 - Christmas celebrations at Gyantse 1926 [ sic ] - l. to r., Sangster, Martin, Major (and beyond the rum bottle) Dean. Martin and Major were retired members of the Indian Army (non-commissioned officers or other ranks) who had settled down in Gyantse and married locally. One of them was in charge of the post and telegraph. In the background is the dzongpen '] [MS 29/07/2006]

Other Information - Cultural Background: Hopkinson wrote home in a letter that Dr Mulligan in particular was concerned about the impression that this photograph would give to his family of his life in Tibet: “Mulligan borrowed my photos E 55 & 56 of us all sitting in the veranda with the Tering’s after lunch with a conspicuous bottle of whisky, in the middle of the day, and says he is doubtful whether it would not shock his people if he sent it home. So perhaps it is necessary to explain that it is not so bibulous as it looks, and that the whisky in the middle of the day is only drunk by the Tibetan guests - similarly the photo of the veranda (E 71) is not really so bibulous as it appears - the bottles on the side were beer bottles (full) for return to the mess godown - tho’ I must admit that I would have had them removed, had I realised they were going to come into the picture.” [A. J. Hopkinson Archive, OIOC British Library, Mss Eur D998/54, Journal Letters from Gyantse and Various Camps, 1927-28, commencing February 5th 1928, Gyantse, pages 6-7] [MS 03/08/2006]