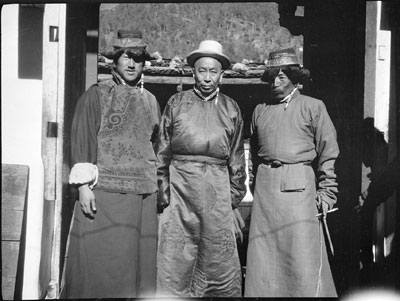 Right to left: Sonam Tobden, the Head Clerk of Yatung, The Tibetan Trade Agent Depon Miru Gyalwa and Rai Sahib Tsering Wangdi, the Head Tibetan Clerk at Gyantse. This photograph was taken at Pipitang outside the residence of the Tibetan Trade Agent in December 1926 when Hopkinson visited the Depon en route to his post in Gyantse. A. J. Hopkinson dined there on a number of occasions, although his diaries and journals fail to conceal that he sometimes found these visits trying

Notes on print/mount - One contact print made from this negative is contained in A. J. Hopkinson's negative case with the negative. The print appears to have been removed from an album, as there are traces of black mounting paper around the edges of the print as if it has been taken out after previously being glued in place. A partially decipherable caption has been written on the back in pencil: "R to L: Sonam (Hd. Clerk Yatung) - Tibetan Trade Agent - Rai Sahib Wangdi (Clerk Gyantse)". The number 6 has been written on the front top right corner in pencil. [MS 29/06/2006]