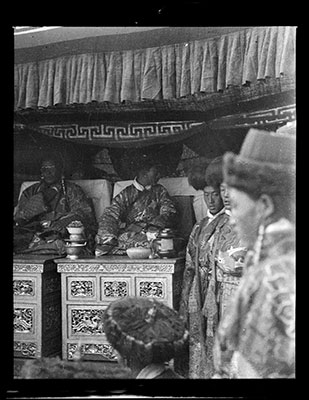 Two Yaso commanders in ceremonial dress seated on throne-like seats with ornately carved and gilded wooden tables in front of them under a tent canopy. This photograph was taken at the 'Preparing the camp at Lubu' (klu sbug sgar sgrig) ceremony on a grassy meadow south of the Lingkor on the 22nd day of the First Tibetan month. On one of the tables there is a drinking vessel and bowls containing food. A group of attendents in ceremonial dress look on. One of the Yaso commanders, the one on the left, is wearing sunglasses and may be Dundul Namgyal (George) Tsarong.

Other Information - Dates: Two of the images in this batch of three that have related contact prints have date queries written upon them ('1939?' and '1937?'). However, the Yaso seated in the picture seem to have been those that in other images in Richardson's negative folder 5 can be dated to 1937 and similarly have a 510 batch reference number. As this role changed every year, 1937 seems the most probable date for these images, too. Also, Richardson seems to have stopped using 6x4.5 sized images by 1939, changing back to 6x9 images using his Zeiss Super Ikonta camera quite shortly after the Mission under sir Basil Gould left [MS 19/12/2005]