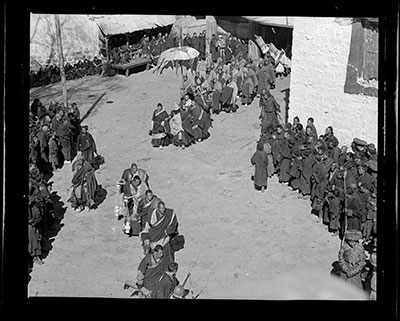 The Ganden Tripa (dga' ldan khri pa) or Abbot of Ganden, leaving the Jokhang during the Monlam Torgya ceremony. A ceremonial umbrella is being held above him and he is preceded by a line of monks carrying censers and sticks of insense. Behind him is another group of monks and the beginning of the procession of laymen carrying Victory Banners (rgyal tshen). Mainly monk onlookers line the street.