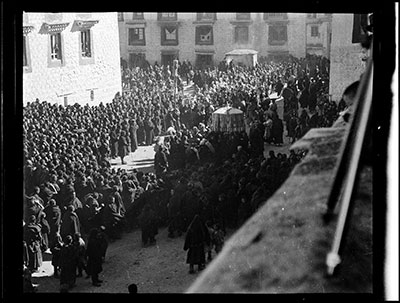 Procession of the Nechung Oracle, the State Oracle of Tibet, along the Barkhor just beyond the balcony of the Doring house from where Richardson was photographing. The Oracle is under the ceremonial umbrella in the centre of the image. He would be in trance and his retinue seems to have surrounded him closely at this point, as if listening to what is being said or performed. The street is lined with crowds of mainly monk spectators. A camera tripod is visible on the right hand side of the image. People can be seen leaning from windows to watch the procession.

Manual Catalogues - Richardson's Hand List: Negative album No.1 no 64. 'The Gnas-chung oracle appears from the Jo-khang where he has a special room. He is in a trance and dances in front of the Jo-khang and the Dalai Lama's room and then rushes after the Gtor-ma. (The Gtor-ma is carried to the outskirts of the city, followed by the troops, a body of monks, and the Gnas chung oracle. It is burnt there, and the troops fire two ancient cannon of Tibetan make, with leather barrels, at a target on a hill on the other side of the river. I have no photographs of that part of the ceremony). [KC 24/7/2006]

Other Information - Setting: The figure under the ceremonial parasol ( gdugs zhabs) is the Nechung Oracle ( gnas chung sku rtan or gnas chung chos rgyal ). The oracle and his retinue are following the Torma votive offering around the Barkor.[TS 8/2/2005]