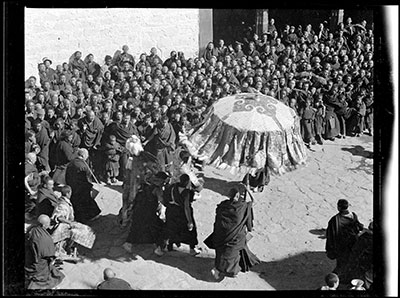 The Nechung Oracle, the State Oracle of Tibet, in trance and wearing his plumed headdress walks in procession along the Barkhor immediately below the Doring balcony where Richardson was taking photographs. The Shira entrance to the Jokhang can be seen in the background. A ceremonial umbrella precedes the Oracle and there is a large number of monk spectators.

Other Information - Setting: The figure under the ceremonial parasol ( gdugs zhabs) is the Nechung oracle ( gnas chung sku rtan or gnas chung chos rgyal ). The oracle and his retinue are following the Torma votive offering around the Barkor in central Lhasa. Hugh Richardson describes the appearance of the Oracle in the streets surrounding the Jokhang Temple in his book Ceremonies of the Lhasa Year : "A loud burst of oboes and cymbals and some hectic activity at the door of the Jokhang signal the appearance of the Oracle who rushes out in a state of possession grasping his sword and bow. After gyrating round the courtyard, he sets off down Barkor supported two stalwart monks, in pursuit of the torma" [Serindia Publications, London, 1993, p. 48] [TS 8/2/2005]