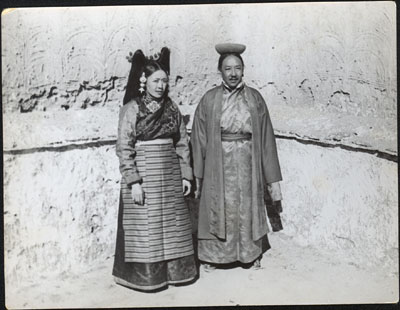 Kyibu, city magistrate, 6th rank official in charge of city police standing with his wife. Full length. Wearing elaborate brocade silk chuba, and other adornments as this was probably taken during the New Year ceremonies in 1937

Biographical Information - Kyibu, a 6th rank official in charge of the city police, with his wife. He was one of the four boys sent to England to be educated at Rugby in 1913 (arranged by Sir Charles Bell and the 13th Dalai Lama). Kyibu was married to one of Jigme Taring’s sisters and lived in a house near the Jo khang. He did not do well at Rugby and upon his return to Lhasa was put in charge of developing the telegraph system, which he knew little about, and so retired to the family estates. Spencer Chapman describes him as a “nervous little man with an apologetic air and a straggly moustache”. (1938:86) [CH 2003]

Biographical Information - Kyibu was one of the four boys sent to England to be educated at Rugby in 1913 (this was arranged by Sir Charles Bell and the 13th Dalai Lama). He was married to a member of the Taring/Tering Family. [Marina de Alarcón ZF 1995 4]