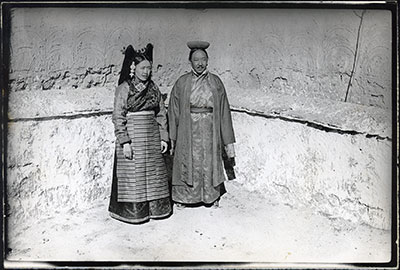 Kyibu, city magistrate, 6th rank official in charge of city police standing with his wife. Full length. Wearing elaborate brocade silk chuba, and other adornments as this was probably taken during the New Year ceremonies in 1937

Notes on print/mount - The back of this print is covered in crop and reproduction instructions. The reference '5-4' has also been written on the back of the print in pencil, as has the caption "Kyipup, the old Rugbeian city magistrate with his wife". A thin piece of paper has also been stuck across the top edge on the back of the print and folded over the front. A number of reproduction instructions have bee copied to this paper in red crayon, as has the caption also seen on the back [MS 30/03/2006]

Biographical Information - Kyibu, a 6th rank official in charge of the city police, with his wife. He was one of the four boys sent to England to be educated at Rugby in 1913 (arranged by Sir Charles Bell and the 13th Dalai Lama). Kyibu was married to one of Jigme Taring’s sisters and lived in a house near the Jo khang. He did not do well at Rugby and upon his return to Lhasa was put in charge of developing the telegraph system, which he knew little about, and so retired to the family estates. Spencer Chapman describes him as a “nervous little man with an apologetic air and a straggly moustache”. (1938:86) [CH 2003]

Biographical Information - Kyibu was one of the four boys sent to England to be educated at Rugby in 1913 (this was arranged by Sir Charles Bell and the 13th Dalai Lama). He was married to a member of the Taring/Tering Family. [Marina de Alarcón ZF 1995 4]

Other Information - Photographer: Images in this group were probably taken by Hugh Richardson. Not only is this suggested on the back of print 1998.131.494.1, but circumstantial evidence also suggests this. This kind of ceremonial dress would be worn on the 2nd day of the New Year, which in 1937 fell on February 13th. Chapman was the only member of the mission who was allowed to go to the Potala on that day, where he took photographs and cine film of officials on horseback and of the 'Pole Trick' outside the Potala. Richardson, however, had to visit about eight lesser officials with New Year greetings, some of whom would be wearing special dress prior to or after going to the Potala. As this image seems to have been taken in Kyibu's house, it seems likely that this image was taken by Richardson whilst making a New Year visit [MS 30/03/2006]