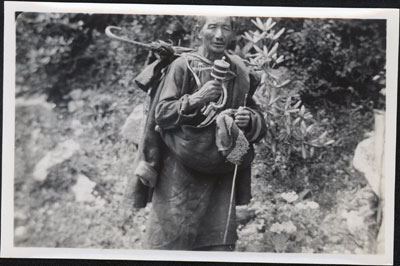 Monk with prayer wheel in the Chumbi Valley when the Mission party under Sir Basil Gould was en route from Gautsa to Phari. The monk is holding a prayer wheel and has an umbrella in his backpack. Other photographs of this man reveal that he was also carrying a large thanka [see 2001.35.23.1 & 2001.35.24.1]

Other Information - Related Images: Caption for this image in Nepean's album (see Same Image As) - 'Itinerant Monk in the Chumbi Valley'. [MS 28/07/2006]