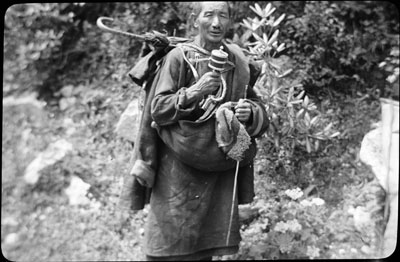 Monk with prayer wheel in the Chumbi Valley

In Negative - 'YN 13' has been scratched into the negative in the bottom left hand corner. This identifies the image has having been taken by Evan Yorke Nepean [MS 09/03/2006]

Other Information - Dates: It seems likely that this image was taken on or just before August 2nd -5th 1936 because the images taken by Nepean appear to have been ordered and numbered broadly chronologically. Furthermore, in his account of events for August 5th 1936, Chapman states: "Met three begging monks. The chief one, a gaunt old man with a lovely copper prayer wheel bound with silver, had a large religious painting which he explained to us in a queer chanting voice. Filmed him." ['Lhasa: The Holy City', F. Spencer Chapman, London: Chatto & Windus, 1938, p.30]. This image is related through Nepean's album in the Pitt Rivers Museum with two other images showing this man as part of a group and with a thanka painting, as well as having a prayer wheel and Chapman's description, may, therefore, relate to the encounter with this monk [MS 09/03/2006]