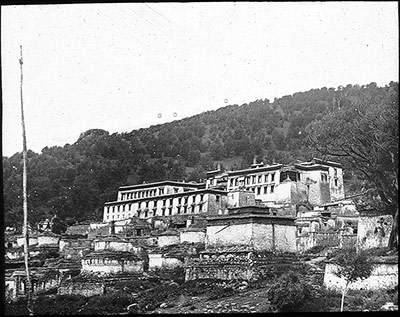 Other Information - Related Images: Although this lantern slide has been marked up, apparently by Bell, with the number '223' in red ink, which cross-references to Q.211, in fact the negative image with this number and the lantern slide are completely different. The negative glass plate image is a close-up of a portion of the building but the lantern slide is a middle distance landscape and is in fact a copy of 1998.286.224.1 [MS 6/9/2004]

Notes on print/mount - 'Reting Monastery' has been written in blue ink, apparently in Bell's handwriting [MS 6/9/2004]

Technical Information - The lantern slide seems to have been coated with a film or varnish.

Bell's Diary entry for 2nd September 1921:"We then see the private apartments of the D[alai] L[ama], who has stayed here twice. His private sitting room is a large one, more than twice as large as each of the Hutuktu's two rooms with the couch at one end under a yellow silk covering. Along one side are numerous images, bowls of holy water etc. etc. Windows run down the length of the room with yellow instead of the usual white cloth. Outside the narrow verandah are the usual yak hair curtains, which must always be two, an upper and a lower one, known respectively as the "Heaven Curtain" ( nam-yol ) and the "Earth Curtain" ( sa-yol ). // This private room is entered through the Hall of Audience with the D[alai] L[ama's] throne on a broad dais that runs thr length of the Hall. Here the D[alai] L[ama] gives audience to laymen who come to bow down before him." [Diary Vol. XII, p.58]

Other Information - Description: Bell's Diary for 29th August 1921:"Ra-dreng [ Tibetan script ] is 13 miles from Phon-do, and lies at an elevation of 14,000 ft in a wood of juniper trees, which grow to a height of 50 or 60 ft. Their height and and thickness and the large number of them excite wonder and admiration among the Tibetans who come here, and I myself have never seen juniper trees of such size growing at so high an elevation. The monastery and wood face south and the climate is surprisingly warm, when the altitude above sea-level is considered. // Two of the priests in charge of the monastery, who look after us, tell me that King Song-tsen Gampo visited this place. Cutting off his hair, he strewed it on the ground and prayed that timber might be provided for him to build a temple ( tsuk-la-kang ) here. In answer to this prayer these trees sprouted from his hair. Some three hundred years later Atisha's disciple. Drom-tom-ba (spelling?) built the temple and monastery. // The priests say that the trees have never been cut since Songtsen Gampo time, and are consequently 1200 years old. they certainly appear to be of great age. Many are withered at the tops, while others are quite healthy. It is not allowed to cut or lop them, but when pieces are broken off by snow, wind etc., these can be utilised." [Diary Vol. XII, pp. 48-9