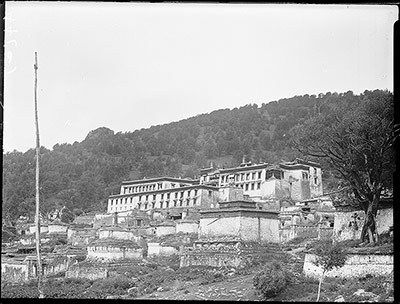 Contemporary Publication - This image was published in 'A Year in Lhasa' in The Geographical Journal, February,1924, facing p.101:"The Labrang (Administrative Building) of Reting Monastery". This piece was derived from a lecture given to the Royal Geographical Society in London on 3rd December 1923 [MS 10/9/2004] [MS 6/9/2004]

Other Information - Description: Bell's Diary entry for 2nd September 1921:"We then see the private apartments of the D[alai] L[ama], who has stayed here twice. His private sitting room is a large one, more than twice as large as each of the Hutuktu's two rooms with the couch at one end under a yellow silk covering. Along one side are numerous images, bowls of holy water etc. etc. Windows run down the length of the room with yellow instead of the usual white cloth. Outside the narrow verandah are the usual yak hair curtains, which must always be two, an upper and a lower one, known respectively as the "Heaven Curtain" ( nam-yol ) and the "Earth Curtain" ( sa-yol ). // This private room is entered through the Hall of Audience with the D[alai] L[ama's] throne on a broad dais that runs thr length of the Hall. Here the D[alai] L[ama] gives audience to laymen who come to bow down before him." [Diary Vol. XII, p.58]