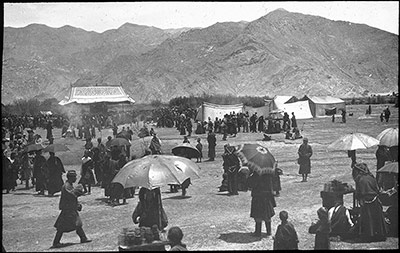 Manual Catalogues - Bell's List of Illustrations entry: "[No. of chapter] XIX. [Subject of Chapter] The Traders. [Subject of Illustration] P.153 (o) Karma-shar lingka during the festival of 'The Incense of the whole world'. Picnickers come here and to the Phala lingka near by to buy sweets, cakes, beer etc. for their parties. See cake-stall in foreground under umbrella. [Remarks] L.89"

Other Information - Photographer: The negative from which this lantern slide has been made (a Postcard-sized negative) is not in the PRM collection. Bell did not use P-sized or 'Postcard' sized negatives of the kind with which this image is made for his images of Lhasa in 1920-21. However, Lt Col Robert Kennedy, who was with Bell in 1920-21, did so, as did W. P. Rosemeyer, who visited Lhasa many times from 1922 onwards as a telegraph officer involved with establishing the telegraph line to Lhasa. This is a copy of a print, not an original image, and the print may well have been acquired by Bell from one of these sources [MS 25/02/2006]