Karmashar Lingka with the Oracle's tent in background 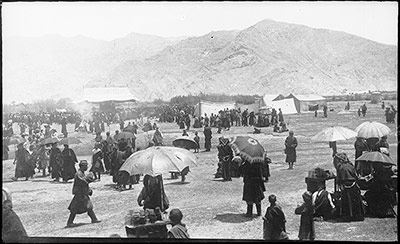 Other Information - Related Images: In Bell's List of Illustrations entry this image is listed as: "[No. of chapter] XXVII. [Subject of Chapter] Amusements. [Subject of illustration] P.261 (gl) (ak) Tents and spectators at Lu-gu Gar-drik (Diary 1.3.1921)" However, this is probably an error. This image has been used to make a lantern slide [1998.285.647], for which the identification of 'Karmashar Lingka' during the festival of the 'Incense of the Whole World' has been given. This seems likely to be accurate as image 1998.286.190 is a close-up picture of the interior of this tent and it seems to have a strong resemblance to that which can be seen here. Bell does incorrectly identify images in his collection at times. However, these are usually the images that he has not taken himself [MS 25/02/2006]

Contemporary Publication - Published in 'The People of Tibet', Bell, C. A., Oxford: Clarendon Press, 1928, facing p.280:"Tents and spectators at 'The Gallop behind the Fort'. Cakes for sale under umbrellas in right and centre foreground." Note: the incorrect identification from Bell's handlist has been transferred to this publication [see notes on Related Images] [MS 25/02/2006]