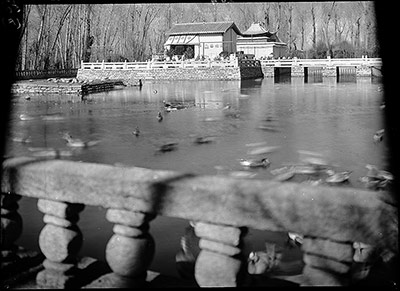 In Negative - Possibly some use of a thin, glossy transparent film or mask on the negative glass plate over sections of the image, especially of the temple [MS 9/6/2004]

Contemporary Publication - Published in 'Tibet Past & Present', Bell, C. A., Oxford: Clarendon Press, 1924, facing p.132:"The Jewel Park. Lake in the inner enclosure. On the right the pavilion in which the Dalai Lama often sits and works. On the left the Serpent Temple". [MS 20/02/2006]