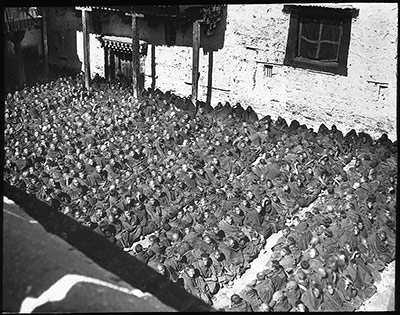 Notes on print/mount - '33' has been written in blue-black ink. This slide seems to have been used as slide 33 in the lecture 'A Year in Lhasa', which was first presented at the Royal Geographical Society on 3rd December 1923. The text, with a lesser number of images, was later published in The Geographical Journal of February 1924. Bell may also have presented this lecture on other occasions about which we have no information at present. [MS 6/9/2004]

Exhibition - Photograph caption from Seeing Lhasa exhibition at Pitt Rivers Museum, 7 September 2003 - 30 November 2004: 'The Great Prayer (Mönlam Chenmo) was instituted for the benefit of all Tibet by Tsongkhapa in 1409 and became part of the New Year celebrations. Thousands of monks from the great Gelukpa monasteries of Ganden, Sera and Drepung came to Lhasa for this event to spend several days reciting prayers. Bell's photograph shows some of them seated in a courtyard of the Jokhang, the most sacred temple in Tibet."