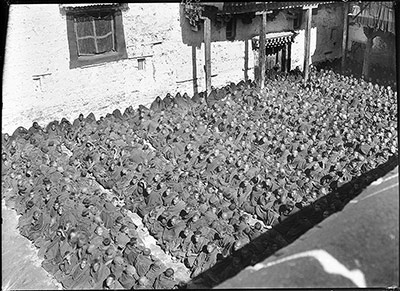 Other Information - Photographer: Bell might be vague in his List of Illustrations about which service this image is of because it appears from his diaries that he did not attend the services during the Monlam Chenmo. This image, therefore, was probably taken by Rabden Lepcha [MS 7/6/2004]

Other Information - Setting: Bell's Diary entry for 16th October 1921:"On my way back from my Sunday ride, at 3.30 pm, I drop into the Tsuk La Kang for ten or fifteen minutes, as it is the fifteenth of the Tibetan month, which is always a holy day with Tibetans. Moreover, there will be an eclipse of the moon to-night, a bad omen. Three hundred monks of the Gyu monastery are holding a service on the front courtyard; it lasts for many hours." [Diary Vol XIII, pp.32-3]

Exhibition - Photographic caption from Seeing Lhasa exhibition at Pitt Rivers Museum, 7 September 2003 - 30 November 2004: 'The Great Prayer (Mönlam Chenmo) was instituted for the benefit of all Tibet by Tsongkhapa in 1409 and became part of the New Year celebrations. Thousands of monks from the great Gelukpa monasteries of Ganden, Sera and Drepung came to Lhasa for this event to spend several days reciting prayers. Bell's photograph shows some of them seated in a courtyard of the Jokhang, the most sacred temple in Tibet."