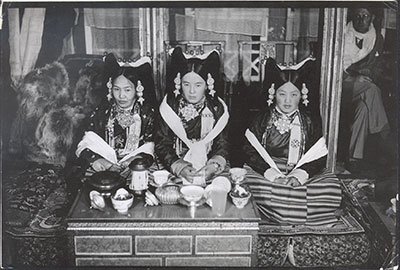 New Year celebrations at Tsarong's house. From left to right: Dele Rabden's wife Norbu Yudon, Mary Taring, Daisy Taring or Changchup Dolma seated at a table with offerings. Dr Morgan can be seen seated in the background on the right

Notes on print/mount - The back of the print is covered in crop and reproduction marks. The caption "New Year Celebration Dele Rabden's wife, Mary Tering, Daisy Tering" has been written on the back in pencil, as has the reference 'OB 7'. A thin piece of paper has been stuck along the top edge of the back of the print and folded over the front. Cropping instructions and the caption have been repeated on this paper [MS 28/03/2006]