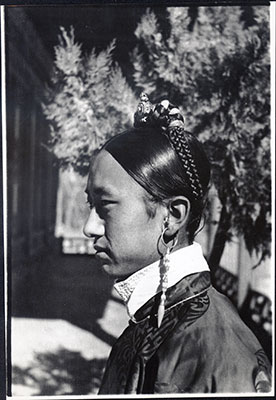 Profile, head and shoulders of Lhalu Se showing in some detail the arrangement of the top knot worn by aristocratic men. Here one can also clearly see the string by which the long earrings worn by Tibetan officials was looped over the ear

Biographical Information - Lhalu Se's father, Lungshar, went to Britain in 1912 and returned to Tibet just before the First World War with many ideas about how to modernise Tibet. He particularly wanted to make the Parliament more powerful politically than the Cabinet and organised a coup to wrest power from them. As a result he was imprisoned and was to be punished by having his eyes gouged out. However, this was such an infrequently used punishment that they could not find anyone to carry it out. Eventually they found an old man in another part of Tibet to come to Lhasa to carry out the punishment. The family name and estate was abolished and so his son was adopted into the Lhalu family and took their name [TS 17/2/2005]