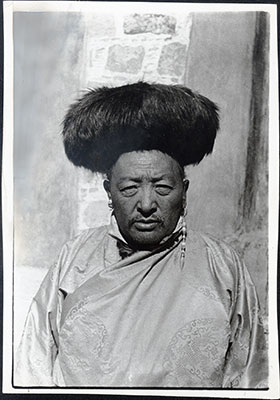 Retired Depon, or General, Khyungram Theji in black fox fur hat worn by officials in the winter. The hat he is wearing is referred to as a 'Mongolian hat' in Tibet

Notes on print/mount - The back of this print is covered with crop and reproduction instructions. The reference 'BH.15' has been written on the back in pencil, as has the caption "Retired General. Hat high official's winter" [MS 25/03/2006]

Other Information - Setting: On the occasion when this photograph may have been taken it seems that the Mission staff were all having their portraits taken in formal dress prior to an official visit to Kundeling Monastery to see the 'Disease Chasing Ceremony'. Bhondong may be attired in formal wear as he too would have been attending this ceremony later in the day. However, he was [MS 25/03/2006]

Other Information - Cultural Background: This Type Of Hat Is Worn Only By Officials Above The 4th Rank. [Marina de Alarcón ZF 1995.5]