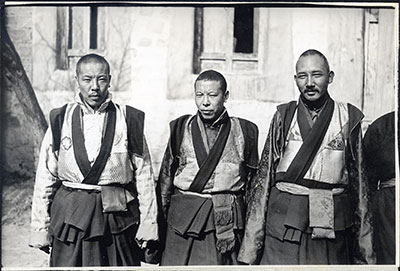 Three monk officials - Mondo on the right, who was at this time in charge of the Potala Treasury, Tsetrung Choden Tendar, the monk telegraph master of Lhasa in the centre and his brother, Mipon Seksing, on the left. Chortens can be seen in the background.

Notes on print/mount - The back of the print is covered in crop and reproduction instructions. The caption "Three monk officials, the telegraphist's brother, the Lhasa telegraphist and Mondo (old Rugbeian)" has been written at the top of the back of the print in pencil, as has the reference '3.2'. The caption is partly concealed by a piece of thin paper which has been stuck across the top and folded over the front. Various crop and reproduction instructions have been written on this paper, as has the caption [MS 25/03/2006]

Other Information - Relates Images: Images prefixed with '3' comprise a group of negatives including Mondo and telegraph officers, and views of Potala from Chakpori and other vantage points. They all seem to have been taken between January 25th - 27th 1936, with this image probably having been taken on January 25th [MS 25/03/2006]

Other Information - Setting: Entry in Mission Diary for January 25th 1936: "Today we had a large lunch party of officials who had not been invited before. There was Ringang's elder brother, a genial man who was once Depon in Kham. Kusho Choden Tendar the busy monk Telegraph-master was another guest; after lunch he went round to Dagg's tent and to his unbounded delight had a wireless conversation with Nainital. His brother - another monk official, Mipon Seksing, an old city Magistrate and Mondo, one of the boys who were at Rugby, completed the party" ['Lhasa Mission, 1936: Diary of Events', Part XIII p.2, written by Chapman] [MS 25/03/2006]