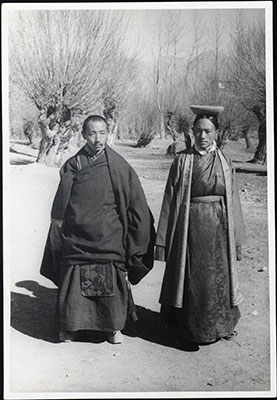 Mondo, who had previously attended Rugby School in England, on the left and Rampa, who was a Tibetan official who was referred to as the 'lay guide to the Mission', on the right. Together they were jointly in charge of the hamlet of Sho at the foot of the Potala. Seen here in the Dekyi Lingka

Manual Catalogues - Caption in Chapman's hand-written list of negatives made whilst on the Mission to Lhasa, 1936-7 [See PRM Manuscripts Collection]: 'Monk and Lay guides v.full good';

Other Information - Related Images: Images prefixed with 'BG' comprise a group of negatives containing images of interiors (possibly at Kundeling), other views of Kundeling, Major Finch, monks and lay guides and Doctor Morgan. Because of the presence of Major Finch in some images, they seem to have been taken between December 24th 1936 and January 2nd 1937, when Finch was visiting the Mission in Lhasa, or possibly up to a few days either side of these dates [MS 24/03/2006]