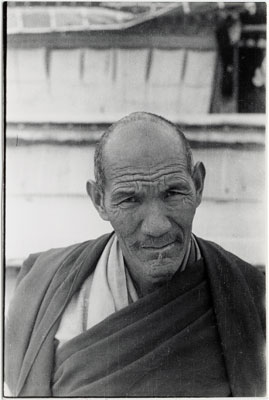 A portrait of a man who is described as either the Head Abbot of Kundeling monastery, or the Kundeling Dzasa, Temba Wangchuk,who supervised the Kundeling estates, including the Dekyi Lingka where the Mission resided.

Other Information - Historical Background: This is most probably not the head abbot of Kundeling but the Kundeling Dzaza (Temba Wangchuk) the chief administrator of the monastery and therefore the landlord of the 1936 British mission to Lhasa. [CH 2003]

Biographical Information - The Kundeling Dzaza , who took care of the estates of Kundeling Monastery and was a leading power in the National Assembly. He was also the landlord for the 1936 Mission as Kundeling monastery owned the Dekyi Lingka. As the holder of the title of “Dzaza” and was allowed to wear a yellow silk robe (similar in pattern to that worn by a shappe in the Tibetan government), under his monastic dress. He is described by Spencer Chapman as a man of “great character” with a firm “but humorous” mouth and bright intelligent eyes. “Though he has never in his life been more than thirty miles from Lhasa, he showed a lively interest in many subjects. He asked us, for instance, if motor-cars had entirely superseded horses in England as a means of transport; and the relative times it would take to get from Calcutta to London be air, by steamer, and on foot.” ['Lhasa: The Holy City', F. Spencer Chapman, London: Chatto & Windus, 1938, pp. 204-205] [MS 22/03/2006]

Other Information - Related Images: Images prefixed with 'BB' comprise a group of negatives containing images of street scenes, the new depon at Gyantse, two monks with long trumpets, mummers, Pendong, Kalon lama, the head of Kundeling, ‘disease chasing ceremony’ and Chinese statues in Kundeling monastery. The images in and around Kundeling seem to have been taken on December 10th at the 'Disease Chasing Ceremony' [MS 22/03/2006]

Other Information - Background: Richardson mentions Kundeling monastery in High Peaks, Pure Earth , London, Serindia Publications, 1998, p. 303. "The monastery of Kun-bde-gling (1936-9, 1944, 1946-50) was built by the Chinese in 1794 for their protege,the Regent Rta-tshag Ye-shes mgon-po, in celebration of their victory over the Gurkhas. It was very generously endowed. A stone stele recording the foundation, inscribed in Tibetan and Chinese, stood at the entrance of the monastery. Further north on a rocky hillock known as Ba-ma-ri (or Ba-mo-ri) stood a little temple of the Chinese war god Kuanti, known to the Tibetans as Ge-sar. ... The Ge-sar Lha-khang was popular with Tibetan pilgrims for the reading of fortunes from bamboo slips chosen at random from a tall vase." [KC 13/10/2006]