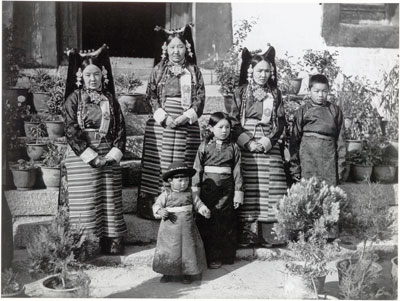 Notes on print/mount - 'Mary [word erased], Tsarong Lhachham, DeleRabden Lhachham, Dele Rabden Se. Mary and Jigme's daughters' has been written beneath the image in the album in pencil, apparently not by Hugh Richardson [MS 10/06/2006]

Biographical Information - From left to right: Rinchen Dolma “Mary” Taring, Pema Dolkar, Norbu Yudon with various children. The three women are sisters, daughters of the late Tsarong who was killed along with his son for alleged support of the Chinese army that invaded in 1910. Tsarong shappe took over as head of the family marrying the son’s widow Rigzin Choden. However, the people of the Tsarong estate worried that this might mean the end of the bloodline and so Tsarong also married the eldest daughter Pema Dolkar. He later also married Rinchen Dolma and a younger sister (not seen here) Tseten Dolkar, the widow of another Tibetan aristocrat, Horkhang. Norbu Yudon was married into the Dele Rabden family. British reactions to these women were varied: Rinchen Dolma was said to speak perfect English, Mrs Dele Rabden was described as distinguished looking but shy and Pema Dolkar as the perfect hostess. According to the photographer, Spencer Chapman the children were “most delightful-quite unspoiled, and full of life and intelligence” (1938:107) [CH 2003]

Other Information - Related Images: Images prefixed with 'C.9' comprise a group of negatives containing images of Tsarong’s family and his house, a Tibetan stove, preparing paint for Potala and camels. The date is not certain, but it seems most likely that these images of Tsarong and his family were taken on the occasion of the first formal visit to his house on September 2nd 1936 [MS 28/03/2006]

Other Information - Description: In most Tibetan houses, except perhaps Ringang's, we had to be on our best behaviour, but Tsarong's parties were always completely riotous, especially when his three children came home from school. ... // After tea the Dele Rabdens came in. ... His wife is very distinguished-looking and has a quiet shy manner. // All three women were dressed in the complicated and resplendent finery of the Lhasa lady of fashion. The glossy black hair is parted in the middle and brushed down at the side to cover the ears. At the back it is neatly tied in two long plaits. The parting divides on the crown of the head so as to run each side of a small patch of hair as big as a penny, then unites again. The hair from this isolated portion is made into a small plait which covers the parting down the back of the head. Two heavy gold ear-rings set with large pieces of turquoise are hung from the hair above the ears, effectively framing the oval face. On the back of the head is worn a concave triangular crown closely covered with strings of seed pearls and further ornamented with a row of corals the size and colour of cherries. False hair is suspended from each side of the crown; it hangs loose to begin with and is then plaited with a red tassel so that it almost reaches the ground. ... // It was at Tsarong's house that we first me Tibetan children, whom we found most delightful - quite unspoiled and full of life and intelligence" ['Lhasa: The Holy City', F. Spencer Chapman, London: Chatto & Windus, 1938, pp. 106-7] [MS 28/03/2006]