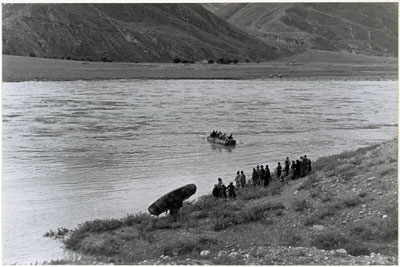 A coracle made of yak hide stretched over a willow frame is seen crossing the Tsangpo River at Nyapso La. Each boat would be made of six yak hides and would be about 8 ft long. Two boats would be strapped together to provide stability and would be allowed to float down river until reaching the other bank. During the winter the river would be crossed by flat-bottomed ferry at Chushul, but during the summer the river was too high and had to be crossed at this point in coracles. There is a pony swimming to the right of the coracle and a group of people and another coracle can be seen in the foreground. Two more coracles are being carried on the other side of the river in the background. These probably contained the supplies and Mission members of the British Mission to Lhasa in 1936-37 under Sir Basil Gould. A settlement can be seen in the distance.

Notes on print/mount - The print is covered with pencil crop mark and editing annotations, including 'CH.A.14', '3b', 'Cut away black and white edges', 'square up edge' and 'Facsimile'. 'CH.A.14' relates to the reference system that Chapman used for images taken on the British Mission to Lhasa in 1936-37. There is also an instruction to make a wide crop on the left hand side of the image (24 mm). The effect of this would be to re-centre the group of people in the frame, and to cut away the expanse of water beyond the land visible in the lower part of the image. [MS 14/01/2005]

Technical Information - This image has been produced by re-photographing another print, rather from an original negative. Significantly, 'Facsimile' has been written on the back of the print and this may reflect this reprography process. This was typical of the process employed with the images in Chapman's collection that were to be reproduced in the official Album of the Mission [MS 14/01/2005]

Manual Catalogues - Caption in Chapman's hand-written list of negatives made whilst on the Mission to Lhasa, 1936-7 [See PRM Manuscripts Collection]: 'Ditto [Boat in water and men standing by] boat in midstream'; PRM Manuscripts Collection: ‘List of Tibetan Prints and Negatives’ - Book 1, From Gangtok to the Natu La August 1936: ‘25/3 - Crossing the Tsang-po. Notice the pony swimming beside the coracle. One was drowned’ [MS 12/03/2006]

Contemporary Publication - This photograph was used to illustrate the official Mission Diary entry for Sunday August 22nd 1936. Chapman was the Secretary to the Mission under Sir Basil Gould and had responsibility for writing up the official diary on a daily basis [MS 25/6/2005]

Other Information - Description: The official Mission Diary entry written by Philip Neame for Sunday August 22nd 1936, to which this image corresponds, states: "We had quite an interesting march, starting with the passage of the Tsangpo in flood by means of yak skin boats or coracles and ending with a mile of track flooded to a depth of about 2 feet by the river. // Our riding ponies and some of the baggage were ferried across the river, and then marched to Chusul, while the bulk of the baggage went the whole way by river in the coracles. // Each coracle is about 8 feet long and two are lashed together to form a ferry raft which then pushes off. The ponies swim along side the raft with their heads held up out of the water by the head ropes. The rafts land about half a mile downstream. They are then rowed over again and carried each on one man's back upstream as far as required. They are very buoyant, but very light and are made of 6 yakskins stretched on a framework of poles. Several ponies broke loose and swam by themselves. Three broke back across the river and swam back to the near shore; unfortunately one of these exhausted by its efforts died, presumably of heart failure. It was evidently best to tow only two ponies at a time, when more than this was attempted trouble usually ensued". Chapman gives a further description of crossing the river in a coracle in Lhasa the Holy City [London: Chatto & Windus, 1938; reprint, London: Readers Union Ltd., 1940, pp. 64-65]. In this he states that the horse that died was Rai Sahib Bo Tsering's best pony. Rai Sahib Bo Tsering was the Sub-assistant Surgeon at Gyantse who worked under the Agency doctor. Chapman wrote of him following attendance at the horse races in Gyantse on August 14th 1936: "He is coming to Lhasa with us. A red-faced genial Sikkimese in loud checks, he is a famous horse-cropper and is liked by everybody. His pony won the open race today" [1940, p.54] [MS 11/3/2005]