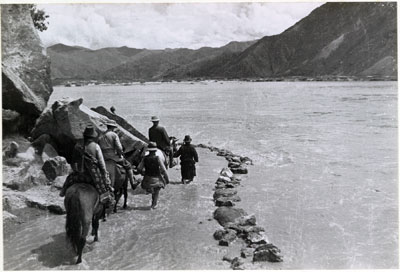 The British Mission party on a path flooded by the Kyichu river near Nyethang. The path is following the Kyichu river on the route from Gangtok to Lhasa. Water from the flooded river is flowing onto the path forcing the caravan to walk very close to the rock face on the left. Developing storm clouds can be seen in the distance. The last horseman in the group is wearing a distinctive tie-dye textile and fur coat or chuba, which was typical of those worn by Sikkimese attendants and grooms or syce on the British Mission. More than fifty horses and ponies accompanied the mission to Lhasa in 1936. The British Mission members are being led on horseback by assistants. A mantra or religious recitation has been inscribed on rock face on left of image

Notes on print/mount - 'Kyi chu Valley' has been written beneath the image in the album in pencil, apparently not by Hugh Richardson [MS 26/08/2006]

Manual Catalogues - Caption in Chapman's hand-written list of negatives made whilst on the Mission to Lhasa, 1936-7 [See PRM Manuscripts Collection]: 'Submerged track near Chusul'; PRM Manuscripts Collection: ‘List of Tibetan Prints and Negatives’ - Book 1, From Gangtok to the Natu La August 1936: ‘27/1 - Flooded track near Chu-shul [Chusul] (11,600) where the Kyoi Chu, on which Lhasa stands meets the Tsang-po’ [MS 26/08/2006]