Officials and monks waiting for the Regent 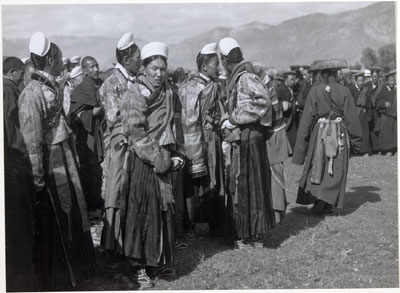 Group of officials, some in gyaluche dress, and monks at the Regent's arrival back in Lhasa from Samye Monastery in November 1936

Other Information - Description: Entry in Mission Diary for November 23rd 1936: "It is difficult to see the procession clearly for the cloud of dust it raises. Leading it are mounted standard bearers dressed in cloth of silver and high witch-like Mongolian hats. Following them are fifty or sixty mounted monk officials wearing gold lacquer hats or large yellow fireman-like helmets of wool. nearer the Regent's palanquin are the higher officials in gala attire. The Shappes and Dzasas in embroidered yellow and blue brocade robes; lower officials in resplendent multi-coloured silk costumes with pleated black skirts and little white cockle-shell hats." ['Lhasa Mission, 1936: Diary of Events', Part IX p. 4, written by Chapman] [MS 01/04/2006]