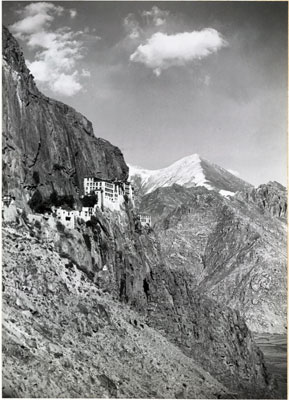 Taktsang Hermitage to the north east of Lhasa, close to Sera Monastery. The hermitage has been constructed on the steep cliff face.

Notes on print/mount - 'Kyesong Rito' has been written beneath the image in the album in pencil, apparently not by Hugh Richardson [MS 10/06/2006]

Other Information - Album: This image appears alongside one other image of Sera monastery on page 5 of Hugh Richardson's album 'Lhasa 1936' [MS 10/06/2006]