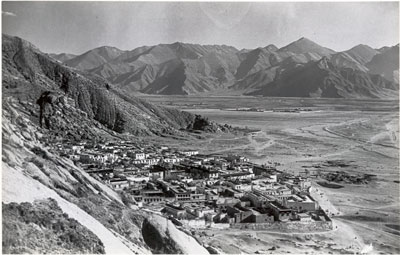 Sera Monastery from the hills above. Lhasa valley in background

Manual Catalogues - Caption in Chapman's hand-written list of negatives made whilst on the Mission to Lhasa, 1936-7 [See PRM Manuscripts Collection]: 'Sera from above and hills (long)'; PRM Manuscripts Collection: ‘List of Tibetan Prints and Negatives’ - Book 2: ‘13/3 - The Monastery of Sera (literally “wild rose fence””) Drepung, Sera and Ganden are known as the “Three Pillars of the State”. It contains 5,500 monks. In the distance is the arsenal (trab-shi)’ [MS 22/03/2006]

Other Information - Album: This image appears alongside one other image of a hillside hermitage just north of Sera on page 5 of Hugh Richardson's album 'Lhasa 1936' [MS 10/06/2006]