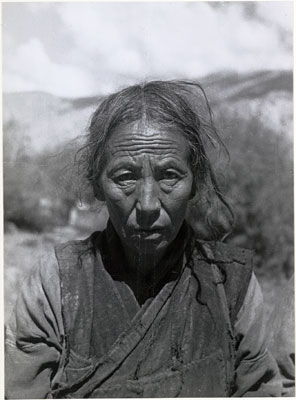 An elderly woman, described by Chapman as being a Ragyapa, the group that dismembered the corpse as part of the rituals that took place when someone died, wearing a woollen chuba and holding an upturned hat in her hands. She is evidently very poor given the manner in which her clothes have been patched together. The background of mountains is out of focus. From her eyes in this image it seems that she might have cataracts.

Notes on print/mount - The caption 'A Ra-gya-pa (disposer of dead bodies)' has been written across the back of the print in pencil. The back of the print is covered with crop, proof and other reproduction marks. These include the instruction to 'Cut as indicated and reduce to 3" across'. There is also the inscription '8-3 5/16' written in red crayon in the top right hand corner of the back of the print. The reference 'C-Q-20' has been written. A piece of thin paper has been stuck to the top of the print at the back. This folds over the front of the image and has been used to transfer information from the back to the front. This paper also bears the caption 'A Ra-gyap-pa (Disposer of Dead Bodies', '2 5/8 x 7/[1]8)' and the letter 'N' written in red crayon [MS 4/2/2005]

Other Information - Description: Chapman described encountering the dwellings of Ragyapa people in his book Lhasa the Holy City [London: Chatto & Windus 1938; reprint, London: Readers Union Ltd., 1940, pp.166-7]. He describes encountering a group when completing a circuit of the Linghkor pilgrimage route around Lhasa close to the Regent's summer palace: "On the left of the road are the hovels of the lowest class of Lhasa society, the ra-gyap-pa, a community of scavenging beggars whose work is to dispose of the dead bodies. ... These ra-gyap-pa must also remove the carcasses of animals that die in the city. Another of their duties is to seek out thieves and robbers who flee from the city to the surrounding country. At the time of the 1904 [Younghusband] Mission they were put in charge of convicts, but the practice has been discontinued. Soon after our arrival a dozen of these ra-gyap-pa came round to the Norbhu Lingka to ask for money, or rather to demand it as their right. For all officials visiting Lhasa must pay them on arrival and departure; similarly when an official is promoted, and on days of festival, these importunate fellows appear. If they are not paid they break into such a frenzied yelling and cursing that it is better to settle up at once and let them go. Some of the ra-gyap-pa are very wealthy and wear the saucer-shaped hat and ear-ring of respectability. ... Beside the track an aged wizened woman with white hair raises herself from her patchwork sheepskin bag, in which she lies to keep warm, and in a thin whining voice asks for alms" [1938, ibid., p.166] [MS 21/3/2005]