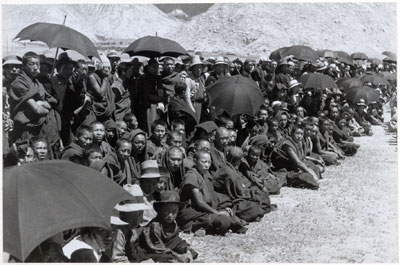 Tibetan monks and laymen with umbrellas to shield the sun watching an army demonstration in Lhasa which was put on for the benefit of Brigadier Neame, whose role it was on the British Mission to discuss military affairs with the Tibetan government

Other Information - Album: This image appears alongside 3 others of monks involved in a variety of activities on page 35 of Hugh Richardson's album 'Lhasa 1936' [MS 25/08/2006]