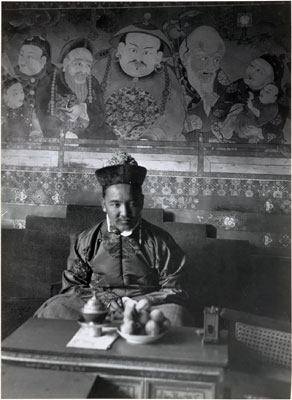 Notes on print/mount - 'Bhondong Shape' has been written beneath the image in the album in pencil, apparently not by Hugh Richardson [MS 12/06/2006]

Other Information - Related Images: Images prefixed with 'C.13' comprise a group of negatives containing images of a photograph of the 13th Dalai Lama, Bhondong, the mission hospital group, the Regent’s arrival [departure], 5 Khampa beggars, the Ngagchen Rimpoche, Taring Rimpoche. There is some confusion as to whether or not the pictures of the Regent relate to the arrival or departure as at one point in the list [C.13.9] Chapman refers to the 'departure'. However, most of the C.13 images used in the Mission Diary relating to the arrival back in Lhasa in November are C.13 images. [MS 12/06/2006]