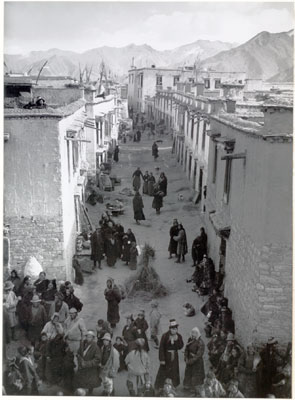 Side street in Lhasa taken from Surkhang Se's house on the occasion of the Palden Lhamo procession. In the foreground a pile of mustard straw surrounding a torma offering of butter and barley flour can be seen in the middle of the street, ready to be burnt.

Notes on print/mount - 'Lhasa City' has been written beneath the image in the album in pencil, apparently not by Hugh Richardson [MS 12/06/2006]

Manual Catalogues - Caption in Chapman's hand-written list of negatives made whilst on the Mission to Lhasa, 1936-7 [See PRM Manuscripts Collection]: 'Looking up side street. Pile of straw ready'; PRM Manuscripts Collection: ‘List of Tibetan Prints and Negatives’ - Book 1, From Gangtok to the Natu La August 1936: ‘38/1 - Lhasa side street waiting for procession to pass. Notice pile of mustard straw ready as fire and white incense burner on left foreground. View from roof of Surkang Se house [MS 03/04/2006]