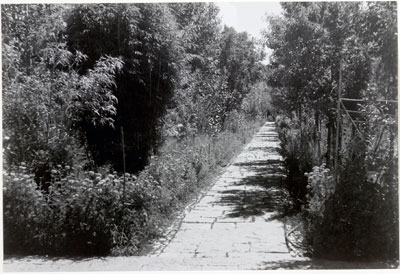 Tiled path surrounded by flowers and bamboo plants at the 13th Dalai Lama's palace, Chensek Potrang, in the Norbu Lingka.

Notes on print/mount - 'Norbhu Ling Ka' has been written beneath the images on page 18 in the album in pencil, apparently not by Hugh Richardson [MS 12/06/2006]

Other Information - Related Images: Images prefixed with 'CB' comprise a group of negatives containing images of the Dalai Lama’s new palace, Norbu Lingka guard, Mission guides, Potala Palace, Trapshi, Neame examining military guard, Lewis guns, Ladakhi people gambling, officials, the throne and silver cups of the Dalai Lama. All the images of the Norbu Lingka seem to have been taken on September 6th 1936, others the next day on September 7th [MS 20/03/2006]

Other Information - Description: "The gardens have been skilfully laid out, but since the last Prelate's death they have not been properly tended. The flowers are mainly self-sown, and spring up, together with weeds, in the chinks of the paving stones. But in spite of this lack of proper care the borders in the autumn were a riot of colour, with red and white hollyhocks, purple phloxes, yellow marigolds, petunias, coreopsis, asters, roses and chrysanthemums. All the flowers of an English garden seem to flourish perfectly at 12,000 ft above sea level" ['Lhasa: The Holy City', F. Spencer Chapman, London: Chatto & Windus, 1938, p. 185] [MS 20/03/2006]