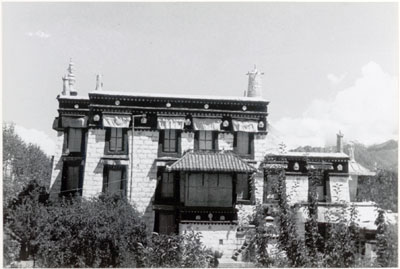 Part of the Dalai Lama's palace in the Norbu Lingka. Gold emblems can be seen on the roof and the well-established gardens in which the palace is situated can all be seen encroaching on the building

Notes on print/mount - 'Norbu Lingka has been written beneath the images on page 17 in the album in pencil, apparently not by Hugh Richardson [MS 12/06/2006]

Manual Catalogues - Caption in Chapman's hand-written list of negatives made whilst on the Mission to Lhasa, 1936-7 [See PRM Manuscripts Collection]: 'Top part and porch of new palace L.'; PRM Manuscripts Collection: ‘List of Tibetan Prints and Negatives’ - Book 2: ‘8/5 - Palace in Norbhu Lingka. It is left just as it was when the last Dalai Lamas lived there’ [MS 12/06/2006]

Other Information - Album: This image appears alongside three other images of the Norbu Lingka on page 17 of Hugh Richardson's album 'Lhasa 1936' [MS 12/06/2006]

Other Information - Related Images: Images prefixed with 'CB' comprise a group of negatives containing images of the Dalai Lama’s new palace, Norbhu Lingka guard, Mission guides, Potala Palace, Trapje, Neame examining military guard, Lewis guns, Ladakhi people gambling, officials, the throne and silver cups of the Dalai Lama. They were all taken on 6th - 7th September 1936 on the occasion of the first official visit of the Mission to the Norbu Lingka and, following this, an official review of Tibetan troops undertaken by Brigadier Philip Neame [MS 12/06/2006]